In 2009, I became a runner.  I signed up for my first race, a marathon, with the intention to train.  And I did…but not in the traditional sense. Most people would go through a training plan running several days a week to prep test of endurance that a race offers.  I trained but I did it all on my bike instead of pounding the pavement, running.  When race day came, my plan was to run a mile, walk a mile and do that for 26.2 miles.  I knew I could stick with that plan but when I started running, I didn’t want to stop.  At the end, I felt amazing and I feel in love with running.  Since then, I’ve run about 8 marathons and 25-ish half marathons.  I say ‘about’ and ‘~ish’ because I’ve lost count.  I guess I should keep better records. On the flip side though, I don’t keep track of the times I’ve kissed my hubby so why should I know the number of races I’ve done??

Most races, other than the when and where, I don’t pay much attention to the details.  For example, the racecourse – Is there elevation gain/loss? Are there trails or roads? or Anything else of importance that maybe someone who pays to run a race should pay attention to?   I figured I don’t want to psyche myself out and worry about elevation gains.  Now, if I were training properly, those details wouldn’t matter to me, I’d be prepared for whatever the course threw at me. However, since I don’t look at the details, I welcome the ‘surprise’ hill as an opportunity rather than a challenge.  (Hmm…If only I could apply this to other areas of my life).

This weekend I ran a half marathon, My Better Half put on by Orca Running.  Since I’m not good at training but love racing, I look for races in between to keep me on my toes so to speak.  I have a full marathon in a few weeks and considered this half a ‘training run’.  And yes…I know this isn’t what you’re supposed to do but it’s what I do and it seems to work for me.  When I signed up for this race, the schwag…a nice bright red hoody and a medal that blinks must have blinded me because I failed to look at the course, again.  No biggie, right?  Wrong.  Last week, I got the usual email from the race organizers about packet pick up and such but they added a note about the course changing due to recent storms.  I decided to go look at the course and to my disbelief, realized the whole race was a series of laps.  LAPS!?!   I’ve said before that running is more mental…and this race was going to be test of willpower.  Laps…seem so boring.  Round and round…counting, looking at the same thing, wondering if you’ve lapped that person or they’ve lapped you.

Race day came and I got up early to head North to Seattle.  I stopped and got my usual Starbucks fuel and made my typical pit stop in Tacoma.  The race was going to be at Seward Park and while I had been there before, I’ve only passed through on my bike. I wasn’t super familiar with the area and so I made sure to get there early so I would have plenty of time to get settled in and warmed up.  I checked in and got my bib and beautiful, bright red hoodie.  (Side note: the hoodie is exciting because most races give you a tech shirt, which I never wear.)   Interesting thing about the race bibs at this particular race, since it was Valentine’s Day themed race, you could run with your ‘Lover’; your ‘Bestie’; or if you didn’t have either, you were considered a ‘Lonely Heart’ and possibly could find someone on the race course.  Since I couldn’t persuade any of my friends or Hubby to run, I was put in the Lonely Heart Club…I really wanted to say ‘taken’ but didn’t have that option.  It sort of felt like high school all over again but I didn’t let that get me down.  I was there to run not worry about my relationship status. In hindsight, I should have just selected the ‘Lover’ bib and wrote in ‘Running.’

The starting line had a beautiful view of Mt Rainer and Lake Washington.  It started on time and took us through the outskirts of the park following the waterline.  The temps were chilly but I knew I’d warm up soon enough.  We were to run 1 out and back portion + 5 laps around the park and we were responsible for counting our own laps. Luckily, my GPS was helping me keep track. The race also had a 5k and 10k options with staggered the starts which meant we’d start lapping some the other racers.  Surprisingly, the laps didn’t bother me too much until lap 4, maybe because there were less people or maybe because I’d already gone around several times.   They had candy on the course (through a ‘tunnel of love’) and water but I needed something a little more and I failed to bring my own race fuel with me.  Finally, I made my last lap and sprinted for the finish.  So for better or worse of not really training, I finished in 2:01.  I’ll take it.

Overall, despite the laps, it was a good race. 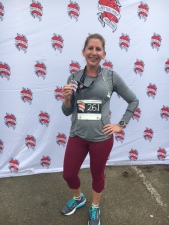 I am... a wife a daughter a sister a young breast cancer survivor a project manager a runner a yoga enthusiast a lover of all animals and most of all a person who just wants to make a difference in this world. View all posts by RSC